Viewing the Men’s Reading section will constitute your agreement to the following terms and conditions:

I am at least 18 years of age (or 21 years in jurisdictions where the legal age of majority is 21)
I accept responsibility for my own actions and absolve Tilleys Vintage Magazines of all liability.
Although there are no explicit images/descriptions, if you feel that you may be offended by the adult content within this section of our site, please do not enter the gallery.

PLEASE NOTE : Many Adult themed magazines will be hidden from the store home page, to access them please use the top right of page search , click on ‘ Q ‘ and input Title required and press return 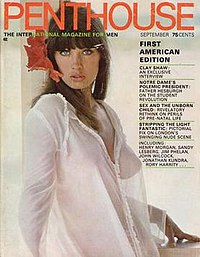 The magazine was founded on humble beginnings. Due to Guccione’s lack of resources, he personally photographed most of the models for the magazine’s early issues.[9] Without professional training, Guccione applied his knowledge of painting to his photography, establishing the diffused, soft focus look that would become one of the trademarks of the magazine’s pictorials. Guccione would sometimes take several days to complete a shoot.

As the magazine grew more successful, Guccione openly embraced a life of luxury; his former mansion is said to be the largest private residence in Manhattan at 22,000 square feet (2,000 m2). However, in contrast to Hugh Hefner, who threw wild parties at his Playboy Mansions, life at Guccione’s mansion was remarkably sedate, even during the hedonistic 1970s.[9] He reportedly once had his bodyguards eject a local radio personality who had been hired as a DJ and jumped into the swimming pool naked.[10]

The magazine’s pictorials offered more sexually explicit content than was commonly seen in most openly sold men’s magazines of the era; it was the first to show female pubic hair, followed by full-frontal nudity and then the exposed vulva and anus.[9] Penthouse has also, over the years, featured a number of authorized and unauthorized photos of celebrities such as Madonna and Vanessa Williams. In both cases, the photos were taken earlier in their careers and sold to Penthouse only after Madonna and Williams became famous. In the late 1990s, the magazine began to show more “fetish” content such as urination, bondage and “facials“.[9]

On January 15, 2016, a press release emanating from then owner FriendFinder Networks announced that Penthouse would shutter its print operations and move to all digital. However, managing director Kelly Holland quickly disavowed the decision and pledged to keep the print version of the magazine alive.[11]

From Wikipea, the free encyclopedia